Home Blog How to Read Body Language and Detect Lies

Lies come in various forms and can be totally fabricated stories similar in theme to the ones below:

They can be exaggerations, such as, “The fish that got away was one meter long!” and can also be concealments or omissions.

For example, a person might describe their journey home from work to their partner and completely fail to mention their short visit to their lover on the way… This is lying too.

Let’s take a look at one of our favourite definitions of a lie from Dr. Paul Ekman, who defines a lie as ‘a deliberate attempt to mislead, without prior notification. This is set against his definition for truth which he suggests is a ‘sincere attempt to provide accurate information.’

The last three words in the lie definition help us to eliminate magicians, negotiators, poker players and actors from the liar label, as in these cases, it is mostly accepted that:

What we do know that is very useful when we need to get to the truth, is that lies will most likely:

I recommend that you pause here for a moment and re-read these four factors as they represent themes that underpin most of the better research on deception and will ultimately help you become better at uncovering lies yourself… more on this later.

When we are truthful, there is spontaneity, consistency, flow and harmony between what we think and feel, as all we need to do is remember an event and then communicate it as we remember it. In a lie, however, there is much more going on under the hood.

A liar will have to:

This constant flip-flopping between emotional stress and cognitive activity and the overwhelming competition for resources between the two domains of thinking and feeling is unsustainable and will cause behavioural leakage across the six channels of communication that betrays the liar.

This behavioural leakage often leaks from one or more of the six communication channels: 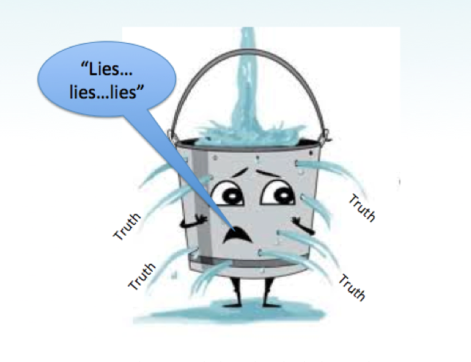 This leakage becomes very interesting within a lie detection setting when it is inconsistent with the stories ABC’s. This refers to the person’s:

We call such inconsistencies Point of Interest, or – PIns.

Most researchers working in the area of truth and lie detection agree that there is no Pinocchio’s Nose, no single indicator of deception.

Deception detection is all about clusters of behaviour.

Be careful not to jump on single indicators of deception… Single indicators hold little value to the behaviour analyst. PIns only begin to hold significance when clustered with other PIns, and, to reiterate, when it is inconsistent with the ABC’s.

Clusters help us to cross-check or corroborate evidence across communication channels towards more reliable judgements. I will go a little further and offer a working definition of a cluster as a guide to prevent you from over-reacting to a single indicator or a couple of indicators from the same communication channel.

3 PIns across 2 or more channels within 7 seconds

of the meaning point of a stimulus/question.

In most cases, by ‘stimulus’, I refer to an unexpected question or probe from an interviewer. However, the stimuli in security and law enforcement contexts could also include:

By ‘meaning point’ of a question, by the way, I mean the point at which a person understands where the question is going, which is not necessarily the same thing as the end of the question.

When correctly adopted and applied, it is incredible how effective this formula is in catching deception. We consistently see great results in our training programmes, including the military, police, recruitment professionals, and Master’s Degree students.

While it can be incredibly tempting to jump on single indicators, especially when developing your skills, don’t. The only person you will be catching out is yourself.

Sign up to our Mailing List below, as we will be following up on this article next week to walk you through the 27 Points of Interest (PIns) we train to the security services and high stake business professionals to help them analyse the behaviour of others, and get to the truth.