Home Blog The Human Mechanics of the NHS

I am sitting in a waiting area in a hospital day-unit, with news of a one hour delay – giving me a nice opportunity to pay attention and reflect. I sit with full admiration for the team of nurses and desk staff creating a calm, smooth environment; with military precision. This triggers memories for my early career as a motor mechanic, enjoying diagnostics work with cars electrical systems, before I moved on to management and behaviour analysis with humans. I was 20 years old when I was promoted from a motor mechanic to a manager of a service department with 24 mechanics. I worked for a busy Citroen car dealership in the late 1970s, and my ‘Service Controller’ role was as the main interface between the car owners and our service department. I was in charge of the logistics of deploying the day’s work across the mechanics to get the cars back to the happy owners (at a fair profit) at the end of the day (in most cases).

That involved low-tech T-Cards and a white-board. Just like this one capturing the status of patients in each of the bays in the busy ward.

(blurred for confidentiality, and with permission).

I was reassured to see that the 1m square white-board was updated and referred to by most of the 12+ person team regularly – “much more practical than tiny screens inside offices that take five minutes to get into” revealed one of the nurses when I asked him about the ‘low-tech’ tool. 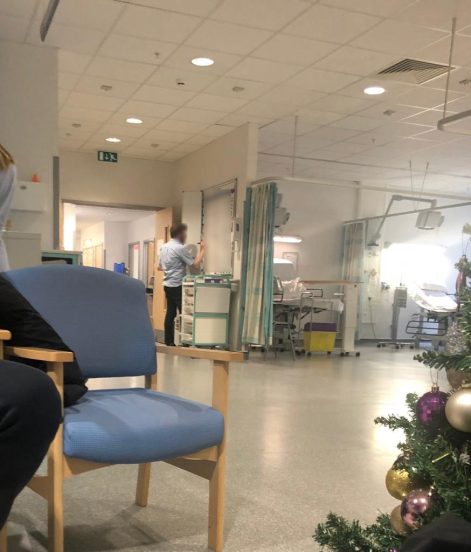 It occurred to me that my ‘Service Controller’ job was similar to what this person is doing.

It was a great promotion from being a motor mechanic, and I was given a company car – a Citroen 2CV. What was worse, is that is was bright yellow.

We had 24 mechanics available to us, minus illnesses and holidays. They ranged from Kenny, a grey-muzzled, wise old foreman, to a couple of ‘wet-behind-the-ears’ apprentices. In between, there were 21 colourful characters, each with their own skill sets, quirks, life traumas and preferences. They all had company 2CVs too (so I wasn’t that special with my banana car). The funniest sight was Friday evening, around 6pm, when we had all wrapped up and the mechanics had scrubbed the grime from their fingernails (my only stains were now only from an ink pen), and we set off to ‘town’ for the weekly night out. Imagine around 18 yellow and green upturned skips, 3 wide and 6 deep, in two lanes, revving their engines at the red stoplight waiting for a formula-one style start.

In our modern workshop we had around a dozen platforms (‘ramps’) that raise the cars up to two metres into the air so mechanics (or Technicians) can access the wheels and the vehicle underside easily. There were specialist bays for light testing, brake testing, tyres/wheels/steering geometry, electronic diagnostics , exhaust gas analysis, and annual (MOT) testing. Mechanics had to work together or fight for those zones in line with their ‘patient’s’ (car’s) requirements. The foreman (Kenny) was the shop-floor arbiter/coach/quality-assurance guru – my right-hand man; my early life/work Mentor. He taught me the basics of attentiveness. He would sit with rookie mechanics on their test-drives, before or after repairs, and let them know quickly that a test drive needs 100% attentiveness. Radio off. Heater motor off. Windows up – but lowered for a time to listen to the car from the outside too. Eyes, ears, noses, bottom on seat, hands-on steering wheel – all geared to sense multi-channel data from the vehicle. He had the patience and skill to coach the mechanics to be as good, or even better than he was.

Kenny was, in his wider role, I guess, what we used to call the ‘Matron’ in the hospital environments I remember from my past. I look around this day-unit and I don’t sense they have an overall boss. A friendly chat with a nurse revealed that they still have them, but they are more office-based and focused on paperwork and governance; “we never see them”, she whispered.

“The unit is nurse-led”, she said proudly, “though we have a Ward Manager and Clinical Specialists and Consultants on hand”.  The culture felt good and real, and I guessed that the Consultant over this team must feel proud – unless this is happening in spite of her/him because they are a great team and they care?

At the heart of the day-unit system is a ‘Protocol’ sheet that was shared with me. It’s what we used to call a ‘Job Card’. In a car workshop environment, this included outline details of the car, the job/fault, and the protocol for addressing the job/fault, and the checkpoints where customer permission or sign-off was required to spend money and time on their car… or in some cases to ‘write it off’ to the scrapyard for recycling of parts. Mechanics also clocked their time and a summary of their work into the Job Card so we could work out a price for the customer, unless it was work done under a warranty or rework due to a mistake made by us. Any parts fitted were added by the parts department when the mechanic went over there to collect them.

I asked the Mechanics to start clicking on and off for the ‘parts trips’ and sent a invoice to ‘Jim’ the Parts Department Manager, for  a few thousand pounds for wasted time over three months, because I didn’t think it was fair for the customer to pay for mechanics time waiting in line behind public customers in the parts department for parts they needed. This triggered a complaint and I was called into the General Manager’s office with Jim. It was an interesting meeting that ended up with the employment of a retired guy called Bruce who became the ‘waiter’ and did all the back and fro running for the Mechanics. Jim (eventually) agreed to pay his salary when I threatened to buy parts from a competing dealership as I reminded him that I was his biggest customer.

I sense similar challenges here, as I hear some of the quiet grumbles from the ‘staff-hub’, next to where I am sitting, about delays in the supply chain of test data, docs and meds.

In this day-unit, they may not have the direct daily pressure of having to cost out the care in order to raise an invoice for the service user, as our glorious UK NHS is free at the point of service to us. That said, I have a great deal of empathy around the constant pressure on the NHS of having to do more (with an ageing population, increasing medical solutions, rising expectations and demand) with less. I know that it is about governance around good use of public money, and about priorities using the regulatory UK ‘NICE Guidelines’ to protect staff from the many times they have to say “no” to sick or injured people. Maybe that is why the Matron is now office-based to handle the care/cost conflicts?

We had a little of that in our guaranteed (warranty) work though we had a bit of slack with ‘sympathetic warranty’ that gave us some wriggle room for reasonable (fine-line) cases to help our customers. Outside that it was the customer’s decision – they could have whatever treatment they wanted for their baby car… as long as they paid for it.

I am interested in the types of diagnostic assessment that are going on here and the alignment with my early work becomes even more pronounced:

The stakes were different than here, as our diagnostics and our mistakes were not a direct matter of life and death, though we were messing around with steering gear and braking systems on very fast cars (apart from Citroen 2CVs!).

Well, that was therapeutic, and a bit of a selfish indulgence, though it raises my empathy for an NHS system that I pray is protected, nurtured, and supported as one of the jewels in the UK history and infrastructure.

What was it that triggered ’emotional contagion’ in the Boris NHS Speech?