SCAnS™ is a behaviour analysis model and technology designed to help all those interested in reading, understanding, and influencing others. Using scientifically validated behavioural cues SCAnS technology can help you to establish what a person is communicating, or hiding, from you. It helps you to get to the truth.

Life and work can create challenging situations for us with other people. Often we are open and transparent with each other. Sometimes, though, people will hide their real thoughts or feelings.

Without good people and communication skills, your organisation will suffer: you will fail more often in negotiations; your business and staff may never reach their full potential; you may not reach your own potential in the organisation so you can make the changes you know it needs. We help clients to use this approach in high-stake purchasing, sales, partnerships, contracts, disputes, mergers, and acquisitions to protect their businesses, stakeholders, staff and clients.

In all sectors, you need to be able to read, understand and influence clients and colleagues at all levels in law, leadership, politics, human resources, finance/tax/investment, medicine, social and local government services, insurance, security/fraud, law enforcement, etc..

With our work partners/colleagues – also with loved ones, children, relatives, friends, sales staff and strangers, it is crucial to read, understand and influence others at a deeper level in a respectful and understanding way that keeps you, and those you care about, safe.

Why was SCAnS Developed

SCAnS™ was developed over the last 12 years out of our frustration with the myths and folklore around lie detection and credibility assessment. Too many body language experts are using only their own experience (e.g. ex-FBI, ex-CIA, ex-Police), or using a ‘soup of myths’ they have gathered from YouTube and/or books on behaviour analysis – sometimes written by the ‘ex-crowd’ in category one. Others are using single-channel approaches which are unreliable, such as just facial expressions, just body language, just statement analysis, or a combination of only two or three of the six channels. 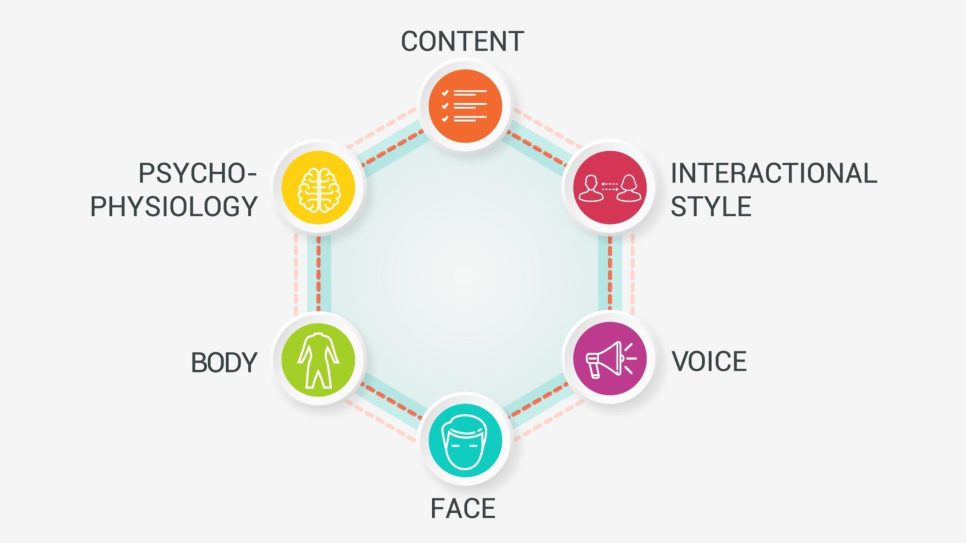 Our clients and we needed a methodology that is reliable to aid high-stake decision-making – robust enough to rely on and simple enough to use on-the-fly in real-time situations. Some approaches only work in the laboratory with subjects wired up to technology or with frame-by-frame video replays – real life isn’t like that. Our clients needed an approach that was ubiquitous, using only our eyes and our ears, without the contamination, ethics, and protocols around covert and overt technology (polygraphs, voice stress analysers, thermal cameras, laser doppler vibrometers, fMRI scans, EEG skull-caps, and the like). It wouldn’t always be appropriate, or practical, to use technology like this in business meetings, intelligence gathering, or negotiations. In addition, this makes the life of a behaviour analyst very difficult as any anxiety markers of being wired up to technology may be misread as being the fear of being caught in a lie. The polygraph is well-known to be the cause of too many false positives because of this factor. The National Research Council examined 57 studies of the polygraph and published their findings in a book entitled “The Polygraph and Lie Detection”(National Research Council, 2002) and concluded that “overall, the evidence is scanty and scientifically weak” (ibid:212). It also concluded for the specific application of employee screening that polygraph testing “yields an unacceptable choice for… employee security screening between too many loyal employees falsely judged deceptive and too many major security threats left undetected (ibid:7).

SCAnS™ is a multimodal model that has been integrated with a Realtime Cognitive Conversations (RC2™) approach to interviewing and elicitation to deliver a gold standard, research-driven solution to help those professionals involved in behavioural analysis and high stake interviews/communications. SCAnS™ harnesses leading-edge research from the fields of psychology, linguistics, sociology, forensics, criminology, technology and communications. The system is integrated into the EIA consultancy projects and in our courses – including the post-graduate programme with our University partners on the Masters Degree (MSc).

What Exactly is SCAnS?

SCAnS™ was peer-reviewed by academics and tested in counter-terrorism contexts. It has three main components:

The 27 Pins are outlined here under the 6 channels

The psychophysiology channel (P) accounts for seven of the 27 PIns, five of which capture physiological signals that users can sometimes see and hear without technical aids: that is, changes in skin colour, perspiration (P3), blood pressure on visible veins (P4), breath (P5), dryness of the mouth (P6) and pupil size (P7). P1 and P2 relate to changes which can sometimes be detected by the naked eye, though usually benefit from technology to be detected (e.g., heart rate and galvanic monitoring).

Similar to Porter and ten Brinke (2010), we draw on insights from FACS-related research (Facial Action Coding System) for the first of the five Face codes (F1). Specifically, our (FACS-trained) SCAnS™ R coders catalogue FACS anomalies with seventeen key FACS codes. F2 marks a durational misfit (Frank and Ekman, 1993), F3 marks evidence of asymmetry (unless indicative of contempt), and F4, evidence of asynchrony between muscle movement across the face for ‘felt’ emotions (unless subtle). Finally, F5 marks onset/offset profiles which do not display the smooth onset/offset patterns characteristic of felt emotions (Frank and Ekman, 1993). As with all features, in our forensic work, we required inter-annotator agreement between three of the four coders for an individual inconsistency to be verified as a PIn in the SCAnS™ analysis.

The Body channel (B) captures features shown to be of value in emotion and veracity judgments (Vrij et al., 1996): specifically, micro gestures or gestural slips indicative of ‘leakage’ (B1); evidence of change(s) in illustrator behaviour (B2) and/or manipulators (B3); evidence of (muscle) tension in the body (B4); and changes in eye behaviour (blinks, eye gaze/movement/closure, etc.). Codes B1 to B5 are based on a more detailed system of Action Descriptors (ADs) developed by the team at EIA, cf. Porter and ten Brinke, (2010), where we simplified the FACS Action Units/Descriptors or AUs to aid real-time annotation and multi-rater coding comparisons).

Interactional Style (IS) is our label for phenomena such as fillers, parroting, evasion strategies (including equivocation markers), response latency, emphatic statements, repetition, qualifiers, pronoun usage (e.g., use of third person/avoidance of first person, or vice versa), (de)personalisation, distancing devices, etc. (following Jurafsky et al., 2009). More specifically, S1 marks changes to the rhythm (or ‘flow’) of the interaction because of features such as (filled) pauses, stutters, disfluencies, response latency, and so on. S2 marks evidence of evasiveness/ambiguity/equivocation (Wright Whelan et al., 2014). S3 encompasses influencing or impression management strategies. For example, the use of religious belief/values/character references, credibility labels, or a proof/evidence frame ((Houston et al., 2012), and representational frames relating to the Other, inappropriate politeness, repetition, etc..

The Content channel (C) contains four PIns. C1 captures changes in tense or inappropriate tense usage (such as when someone pleads for the return of a loved one but refers to them in the past tense). C2 captures distancing language, following the Jurafsky et al., (2009) observation that deceivers will sometimes use linguistic constructions (e.g., fewer self-references, more tentative words) which serve to distance them from the subject(s) of their speech (see also (Hancock and Woodworth, 2013). Here, SCAnS™ users might consider pronouns, tentativeness features, subject/noun changes, emotional terms/affective language, inappropriate concern, qualifiers, minimisers and other epistemic modality markers, etc. (Vrij et al., 2000; Bond and Lee, 2005; Porter and ten Brinke, 2010; see also Newman et al., 2003). The third Content criteria, C3, makes use of an adapted version of Criteria-Based Content Analysis (CBCA). Although CBCA is primarily used to assist (European) courts in evaluating the credibility of children’s (transcribed) narratives of sexual abuse, it has been used to evaluate adult accounts relating to issues other than sexual abuse (Porter and Yuille, 1996; Vrij et al., 2000). When drawing on CBCA criteria, Vrij et al., (2000) used a restricted set in combination with Reality Monitoring criteria. The SCAnR™ method, in contrast, has been to amend CBCA criteria so that users might record, as a PIn, occasions when the content of the story that S conveys: (i) lacks coherence, (ii) lacks unstructured, spontaneous reproduction, (iii) includes inappropriate detail, especially relative to the core of the story and what we know about memory (the account may also be void of related associations and unusual/superfluous details), (iv) exhibits contextual vagueness (as opposed to being characterised by contextual embedding), (v) is devoid of descriptions of interactions (including [recalled] verbatim conversations), (vi) is devoid of admissions of poor memory recall/spontaneous correction of memory errors (without prompting) and self-deprecation, and (vii) is devoid of accounts of mental states (self and other).6 The final Content criteria, C4, is used when the SCAnR™ user recognises a verbal slip as a Pin (Ekman, 2004:40).

An elicitation and a formal interview approach.

SCAnR™ users are advised to ignore any behaviours that are consistent with the account, (emerging) baseline and context. Our reasoning for this is that generally speaking:

The elicitation approach is outlined here. It is also illustrated in our ‘Formal Investigative Interview’ model here: 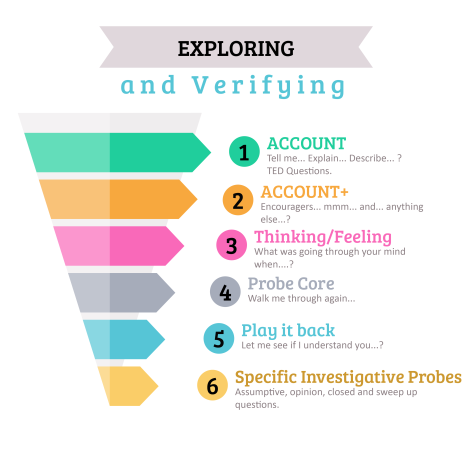 The 3-2-7 algorithm to aid decision making.

Rather than attempting to note everything in real-time, then, users are deliberately ‘freed up’ to prioritise those occasions when an individual demonstrates inconsistencies (or ‘Points of Interest’ [PIns]) across communication channels. These PIns can be recorded on-the-fly, using the SCAnS™ shorthand coding scheme, if note-taking is appropriate. Following a question, probe, or presentation of evidence, SCAnS™ users are encouraged to pay close attention to that individual’s (cross-channel) behaviour for seven seconds following it (Houston et al., 2012:30). Users are asked to be particularly mindful of any communication cues which seem to be inconsistent with the person’s account (i.e., the story they are trying to convey), their emerging idiosyncratic baseline (within the situational context), and all relevant micro/macro contexts. To help in this process, users trained in the SCAnS™ approach are orientated towards the 27 criteria. These research-corroborated criteria relate to all six communication channels. Researchers have suggested that a multi-cue approach (such as this) can be bolstered by having prior knowledge of (i.e., a baseline for) a target’s truthful behaviour. However, this possibility tends to be limited/non-existent in high-stake contexts such as an airport or in televised press appeals where people plead to the watching public for help. For this reason, we advocate that SCAnS™ users pay close attention to change(s) in communicative behaviour, during a given interaction, and what immediately follows each change or cluster of 3 or more PIns across 2 or more communication channels within 7 seconds of a probe/question. This 3-2-7 algorithm allows for corroboration of PIns across channels to aid decision-making. Such changes are not, at this point, to be taken as firm evidence of deception. Rather, as explained above, they are to be viewed as PIns to be probed, using a forensic questioning approach. Where such targeted probing is not possible, they remain as points of interest only. Users are counselled to resist veracity judgments based on passive behaviour only, as what makes an expert adept at lie detection is not only the passive observation of demeanour but also the active prompting of diagnostic information (Levine and Knapp, 2018).

The SCAnS™ methodology is taught to professionals around the globe, either tailored, in-house, for your organisation or during an intensive 3-day virtual public workshop that you can find here.

Hancock, J. and Woodworth, M. (2013) ‘An “Eye” for an “I”: The Challenges and Opportunities for Spotting Credibility in a Digital World.’ In Cooper, B. S., Griesel, D., and Ternes, M. (eds) Applied Issues in Investigative Interviewing, Eyewitness Memory, and Credibility Assessment. New York, NY: Springer, pp. 325–340.

Vrij, A. (2000) Detecting lies and deceit: the psychology of lying and implications for professional practice. Chichester: Wiley (Wiley series in psychology of crime, policing and law).

How to Read Body Language and Detect Lies

Are you analysing behaviour through the lens or in the mirror?